A Banking Union for the Euro Area 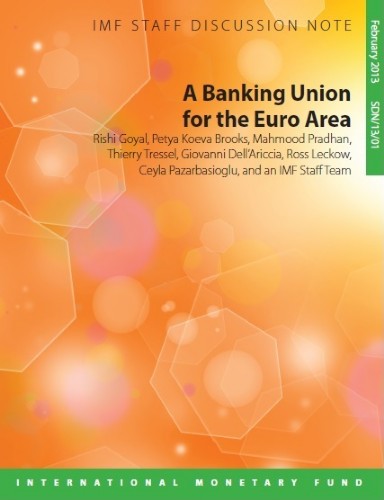 According to a new paper from International Monetary Fund staff, a successful banking union should eventually include three key elements: a single supervisory mechanism to oversee the rules and contain the buildup of risks; a single resolution authority to deal with weak or failing banks; and common safety nets to sustain depositor confidence in the event of shocks.

Prior to the crisis, banks and financial institutions operated with ease across countries, but the framework underpinning the safety of the system stopped at each border. The mechanisms to ensure financial stability—supervision, resolution, and safety nets—were nationally based.

During the crisis, governments in many countries could not provide timely or cost effective solutions, and the framework proved inadequate to deal with the risks across Europe’s financial system.

As a result, trouble in some parts of Europe has amplified and rippled across the euro area. Banks have been unwilling, and often unable, to deploy funds across borders to places where funding is scarce. Also, lending and deposit rates vary widely across Europe; private borrowing costs rise with the government’s; and the European Central Bank’s rate cuts have only limited effects in economies under stress.

“A banking union can reverse this fragmentation of European financial markets and break the adverse spiral of private and sovereign borrowing costs witnessed across the monetary union,” said Mahmood Pradhan, Deputy Director in the IMF’s European Department.

“Single supervision should reduce national distortions, bring a uniformly high standard of oversight, and mitigate the buildup of concentrated risk that compromises stability for all,” said Rishi Goyal, one of the lead authors of the study. “And moving responsibility for potential financial support to the supranational level would de couple banks’ prospects from that of sovereigns with weak finances, protect individual sovereigns from banking sector weaknesses, and thus enhance confidence.”

The single supervisory mechanism, agreed by the European Union Council in December 2012, is an important step toward integrated oversight of the region’s financial sector, according to the IMF staff. But the challenges of implementing the agreement should not be underestimated. These include

• Making certain that the central authority can intervene in a timely manner in any bank as deemed necessary.

The single supervisory mechanism should be accompanied by progress on bank resolution and safety nets. Together, they can help break, or at least weaken, the vicious link between weak government finances and weak banks.

Lack of a credible resolution framework also could impede timely decision-making by leaving national officials to deal with the fiscal consequences of others’ supervisory decisions. In this regard, IMF staff noted it was encouraging that the European Commission will make a proposal for a single resolution mechanism this year, with agreement expected among European policymakers by mid 2014.

A clear plan on common safety nets, such as common deposit insurance, along with credible backstops, will bolster the effectiveness of supervision and resolution by ensuring adequate resources to isolate and deal with problems, the IMF staff said.

It will reduce the risk of an incomplete framework and ensure that national interests do not conflict with those of the euro area. Common resolution and deposit insurance funds should be sized to deal with the failure of a few medium-sized banks, with common backstops for systemic situations.

A banking union is necessary for the euro area, given the severe strains in and fragmentation of its financial markets. Extending it to countries in Europe that are not members of the euro area is desirable, but also raises more complex issues, such as potentially different access to backstops or safety nets, according to IMF staff. Accommodating their concerns will augur well for consistency with the single European Union market.

To this end, the paper proposes recapitalization of frail, domestically systemic banks with funds from the European Stability Mechanism as soon as possible, in countries where government balance sheets are strained.

New capital should shield governments from future unexpected losses on bank balance sheets to break the link between weak government finances and weak banks. At the same time, failing, non-systemic banks should be resolved at least cost.