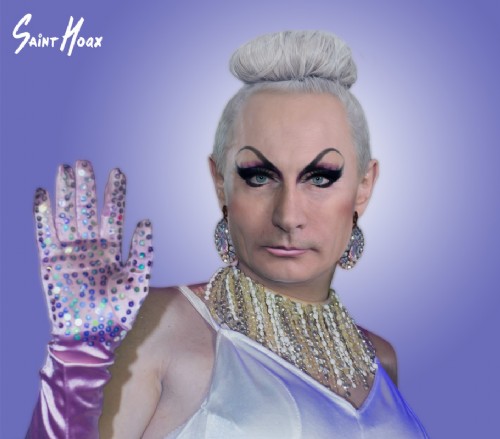 Called "War Drags You Out," the project consists of a series of digital illustrations that depict prominent world leaders in drag.

Infatuated by the element of POP, Hoax works with both tangible and digital mediums to recreate a world based on visual lies.

The protagonists of his collection are the world´s major political leaders like Barack Obama, George Bush or Kim Jong-um which have been transformed to ´drag queens´.

Saint Hoax began working on the show last July, initially painting the drag queens on canvases. The "Poplitical" artist said that the project grew into an expression of frustration world leaders create stylized public personas for themselves, not unlike drag queens.

Saint Hoax describes the commentary the collection of moving images makes, saying, ‘like drag queens, political/religious leaders are expected to entertain, perform and occasionally lip-sync a public speech. but unlike drag queens, the fame hungry leaders don’t know when to take their costumes off.’

Scientist suggests that the brain responds to art differently

YO!Fest will debate a new vision for Europe