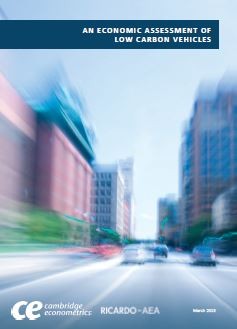 The study is split into two phases: the first phase focuses on the period to 2030, and only considers scenarios with internal combustion engine and hybrid-electric vehicle deployment; the second phase extends this analysis to assess the impact of other scenarios which include development of plug-in electric and hydrogen fuel cell vehicles in the period up to 2050.

The study uses Ricardo-AEA’s technology-based SULTAN model to assess the impact of the various transition scenarios on the total cost of vehicle ownership, highlighting the trade-off between increasing capital costs of vehicles and falling fuel costs. The results from the SULTAN model are then used as inputs into CE´s integrated European model of the economy and energy systems,

The research shows that a cost-effective transition to fuel efficient cars is possible and that, if this can be realised, it will improve the spending power of European consumers, with positive impacts for the wider economy. The transition from lower spending on fuel to increased spending on vehicles will also generate jobs across the European motor vehicle sector and its supply chain; while the reduction in spending on imported oil means that Europe´s net trade position also improves. In a case where the technology costs are higher than those forecast by the SULTAN model, the economic impact will be diminished, but the environmental benefits will still be realised.

Young people are worse off than older generations in today´s labour market, according EESC