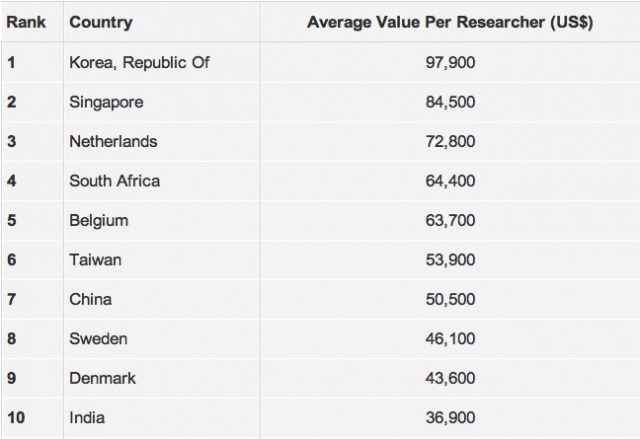 In total, nine Asian countries are feature on the full list of 30 (China and Taiwan are also in the top 10; India, Australia, Japan, Hong Kong and New Zealand complete the list).

Why those countries should be so predominant is said to be because of the sort of research companies get done there. “There is a focus on applied research – research with a short-term immediate commercial outcome,” according to Times Higher Education (THE) editor, Phil Baty. “Businesses are putting hard cash into the universities because they want to create new technology that they take to market and make money from.” In other words, more D than R.

The more fundamental research done in the leading universities of the developed nations may explain why the U.S. comes in at 14th position despite being home to some of the biggest and most important universities and researchers in the world. An academic researcher there attracts an average 19,339 euros of business funding a year, nearly four times less than a counterpart in South Korea. The U.K., comes in in 26th place, attracting 9,967 euros per researcher. In both countries, individual academics may have opportunities for individual consulting contracts with industry that wouldn’t necessarily be captured in THE’s survey.

Africa and Latin America, with one country from each region don’t have a large representation in the index. South Africa comes in at fourth, Brazil at 23rd. The seven nations below it are all from Europe, with the bottom three, Norway (6,863 euros), Portugal (6,461 euros) and Ireland (6,235 euros) attracting as little as a tenth per researcher in business funding as those in the top-ranking countries. That, though, may not suggest that they are substantially less innovative, just they have not developed close cooperation between business and academia across a sufficiently wide range of industries.