By Editorial
Ibercampus
Linkedin
Twitter
Facebook
Email
Imprimir
WhatsApp
The research group discovered that between the ages of 4 and 7 children are already starting to associate the plant world with the animal world when asked to draw plants. The researchers studied the spontaneous drawings that 162 girls and 166 boys (328 in all) produced during the final years of Pre-primary Education and the first years of Primary Education. 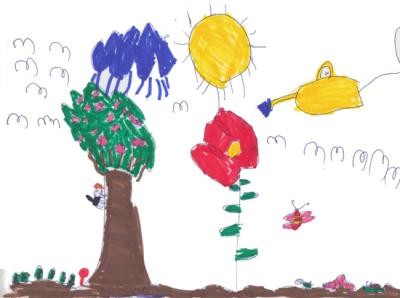 The research on the knowledge that children have about the natural environment comes within the framework of the studies that over the last five years have been analysing, through spontaneous drawings, children's knowledge of the natural environment. In this respect, the researchers point out that the drawings by small children are closely linked to their thoughts and feelings. That is why the study of their representations is regarded as a valuable procedure for understanding their conceptual development better.

The study was conducted at six schools (five in Bizkaia, and one in Burgos). Three schools are located in urban areas with more than 75,000 inhabitants and the rest are located in rural areas with a population of less than 6,000. The distance between the schools does not exceed one hundred kilometres.

In the classroom, with the help of a puppet, the children are told that the puppet does not know anything about the plant world so it is suggested to them that they could use their drawings to explain to the puppet what plants are. In no more than 15 minutes each schoolchild expressed his/her way of understanding plant reality, first by drawing and then by colouring. Each one was given ten crayons to use. The drawings were produced individually in a room next to the classroom or in a specific place in the same classroom. The children were not given any indication or additional explanation about plants, animals or the interactions between them, either in the initial presentation of the activity or during the individual meetings.

When the drawings were analysed, it emerged that the children correctly associated the animal world with the plant world. For example, they depicted animals eating plants. In other words, before reaching the age of eight, they know and distinguish between living beings, and even between inert objects such as the sun, clouds or vehicles. What is true is that the older they were, the more frequently they drew animals and plants associated with each other. These results show that in the early years of education they are already capable of distinguishing between fundamental biological concepts that pave the way towards understanding natural phenomena. So teaching content on concepts relating to biology or sustainability could also be incorporated into Pre-primary Education and Primary Education.

"By way of conclusion," said José Domingo Villarroel, researcher at the Faculty of Education in Bilbao, "it can be said that the evidence we provide is consistent with the assumption that by the age of eight children start to understand the interdependence between living beings in ecosystems. This circumstance is an opportunity for them to reflect on the ecological connections between living beings, including human beings. It is an educational aim that, without doubt, should exert a significant impact on environmental thinking".