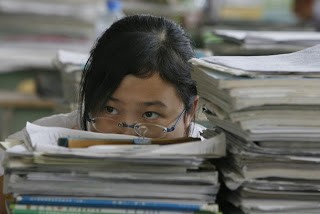 School officials told Chinese media that the agreement serves merely as a ”warm reminder” of long-standing school policy for the new intake of students. But outraged parents and online commentators argue that the process heaps yet more pressure on already overstressed students. “I think this kind of agreement is irresponsible and unfair, and I doubt it’s going to have any effect on student behavior,” says Ms. Li, whose son just started his first year at college and who declines to be identified with her full name. “The school should provide counseling services and other help for students, instead of trying to absolve themselves of responsibility even before anything has happened.”

Suicide rates among college students have actually remained fairly stable among college students, hovering close to one or two per 100,000 people in recent years — a rate well below the national average. While there is no official figure for suicides on a national level, a research project conducted by the Ministry of Health in 2010 found the suicide rate in larger urban areas was 6.41 per 100,000 people and in rural areas, it was 10.01 per 100,000. However, with the threat of litigation rising as more Chinese pursue legal action to redress grievances and stress levels soaring among students, the college in Dongguan appears to have decided it needed some insurance.

Education has long been seen in China as the only path to success, a legacy of the country’s Confucian heritage. But a massive increase in the numbers of students taking university courses coupled with a sharp economic slowdown has meant that, for many, a degree is not the golden ticket it once seemed to be. Of the class of 2013, with some 7 million graduates across the country, just 35% had found a job at the time of graduation — a dramatic fall of 12% year on year.

Stress the main cause

With stress levels for students on the rise and postgraduation opportunities harder to find, some are starting to doubt the value of education as an investment. However many suicide and self-injury cases nowadays have nothing to do with study pressure, but occur in relation to love affairs, employment pressure, family background and interpersonal problems.