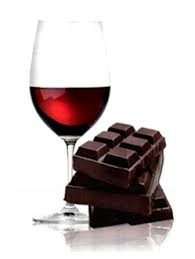 The study, which was published on March 8 in Science, shows that resveratrol stimulates production of SIRT1, a serum that blocks diseases by speeding up the cell´s energy production centers known as mitrochondria.

Resveratrol is a naturally-occuring polyphenols antioxidant that is found in some plant products like grapes and cocoa. It is categorized as a phytoalexin, an antimicrobial compound that is produced by plants to protect them from rough environments like excessive ultraviolet light, infections and climate changes.

Resveratrol has been linked to protection against obesity and diabetes, a reduced risk for blood clotting and a way to lower "bad" LDL cholesterol, due to the compound´s ability to dilate blood vessels, increase nitric oxide and block the stickiness of platelets.

The best chocolate: the dark chocolate. Milk chocolate contains milk, and milk cancels out chocolate’s antioxidant effects, according to a study published in the journal Nature. Proteins in the milk bind with the antioxidants, making them less easily absorbed by your body. Not only that, but pasteurized milk is something that is ideally avoided.

Dark chocolate contains less sugar than milk chocolate, although even most of the dark chocolate varieties contain quite a bit of sugar. Sugar can seriously impair the functioning of your immune system and should be avoided as much as possible.

Resveratrol, a natural antioxidant that is found in red wine and cocoa, has been lauded for its anti-aging benefits. In light of those claims, some companies are capitalizing on resveratrol´s purported health benefits. Resvology, a skincare company, claims that their products have an ester form of resveratrol called resveratryl acetate that can smooth lines and wrinkles. Some spas offer baths filled with red wine as an anti-aging treatment.

Resveratrol benefits you in many ways, including:protecting your cells from free radical damage,

Overall, researchers are optimistic about resveratrol’s unique health benefits, though they may not agree on how much resveratrol is needed to capture the protective effects. Some research shows dramatic results with small amounts of resveratrol, like that found in a glass of red wine. While other studies maintain that the amounts of resveratrol needed to confer positive benefits could only be obtained through liters of wine a day (which most would agree to be a bad idea for health on any front), leaving the delicate delivery of large amounts of resveratrol to the supplement companies rather than the wine companies. The Linus Pauling Institute has an interesting table that displays the resveratrol levels of various wines, showing that an average glass of red wine will range from 0.2 to 2.0 mg per glass of wine.

In the case of chocolate, researchers have just determined that eating a precise amount of chocolate—6.7 grams a day—offers you the best health benefits.  6.7 grams of chocolate amounts to one small square of chocolate two or three times a week, which is less than half of a candy bar per week, when you are eating it for health reasons.