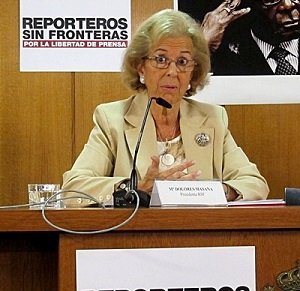 I’ve addressed the Federation of Spanish Press Associations’ (FAPE) Arbitration, Complaints and Ethics Commission on several occasions, using spanish language and recently, english one. You can find the two last ones in "Comisión de Arbitraje, Quejas y Deontología (Spain) (1). Watch out " and in

I’ve decided to return to the subject again, and will do so from time to time in the future. Looking the other way or giving up is like trying to keep a cork underwater.

The expression Timeo hominem unius libri (I fear the man of one book) is attributed to Thomas Aquinas. The phrase refers to dogmatism and narrow minded people. But times have changed and now there’s no reason to fear people like María Dolores Masana, because her working methods are far below the level that other journalists have demonstrated both in Spain and abroad.

María Dolores Masana obtained her degree in journalism from the former Barcelona School of Journalism, but there’s no record that she has a degree in Information Sciences. That is, she didn’t think deepening her knowledge was worth her time, though she did consider it worthwhile to take on administrative posts such as President of Reporters Without Borders or Vice President of the Arbitration, Complaints and Ethics Commission of the Federation of Spanish Press Associations (FAPE). And in her many years as a practicing journalist, she has only written one book. Just one. Hundreds and hundreds of journalists have written various, even numerous books, and of far better quality than hers.

The huge distance between María Dolores Masana and Oriana Fallaci

As Masana is a woman, comparisons with Oriana Fallaci are inevitable. But what a difference between the one and the other! What an abysm of experience and prestige!

Masana’s book, called Islamic Princesses, was published in 2004. She says in the prologue: “This book focuses mainly on the circumstances of Muslim women. It does not attempt to be a serious study.” And it certainly isn’t. Of its 322 pages, Masana dedicated just 10% to interviews with Arab women.

This contrasts with Oriana Fallaci’s Interview with History, 618 pages in length and dedicated to undiluted interviews with 26 of the most important politicians of the 1960s. They are lengthy interviews that demanded rigorous preparation, in contrast to Masana’s all-too-brief interviews with Arab women. We’re talking about utterly distinct degrees of knowledge and attitudes toward life. Oriana Fallaci abandoned her studies in medicine but knew exactly what she wanted: she wished to be a journalist with all its consequences. Nothing else. In this she was profoundly like Truman Capote, who also knew very early on what he wanted from life. A primary school teacher taught him how to write and conveyed her passion for writing. And he decided to devote himself to a life of writing, without attending college.

In nearly fifty years dedicated to her profession, Oriana Fallaci wrote twelve books. Some readers may be opposed to her last ones; others, completely in agreement. What no one can deny is that she was very well equipped for her chosen vocation.

To give an idea of the distance that there is between Masana and Fallaci, compare the last six words of the introduction to Masana’s book, “In sha Allah. If God wills.” Well, the Italian reporter’s novel Inshallah contains 720 pages.

Is María Dolores Masana the sole author of her only book?

With respect to María Dolores Masana, doubts arise as to whether she wrote the whole of her only book.

I’ll quote two passages from the book: the cover and page 11 of the Acknowledgments.

In the social sciences there is an area within the field of Content Analysis known as “disputed authorship.” The notion occurred to me after reading the book’s Prologue, Introduction and Epilogue, as well as the rest of the book, of course, and as I commented above, when I noticed the large disproportion between the number of pages in the book and María Dolores Masana’s interviews.

So would it be too much to ask that María Dolores Masana, although a posteriori, to do what many authors do and specify what each person who collaborated on the book actually did? That she detail the nature of each contribution? It’s a simple thing to do.

On pages 1029 – 1031 of his great book The Powers That Be (dedicated to an investigative history of Time magazine, CBS television and the Washington Post and Los Angeles Times), the journalist David Halberstam mentions those persons who most directly helped him and in exactly what that help consisted. He also acknowledges, with first and last names, the hundreds of people he interviewed. He says he respected the wishes of those people who preferred to remain anonymous. And he makes the following comment: “The average interview lasted between ninety minutes and two hours. Some people saw me six or seven times. Interviews are a curious thing, at once the most exhausting part of this kind of journalism and the most valuable part, the best part, the most revealing in a human sense.”

But one only has to compare Fallaci’s and Halberstam’s interviews with those of Masana.

Above all, that Fallaci or Halberstam could have written anything resembling María Dolores Masana’s sentence for the Complaints Commission is unthinkable.

A note on Masana’s “ethics”

I’ve already commented in previous articles about what seems to me to be ethical lapses by María Dolores Masana in her text as arbiter. In her book, there’s a striking detail in her interview with the Algerian journalist Selma Brahimi.

“I’ve lost my fear of the terrorists…but not of the government. Please don’t mention my name –she asked when I requested the interview- my work is crucial to my family’s economy.”

There you have it, clear as day. Masana asks her three questions, just three, and then gives her real first and last names. Didn’t Masana ask herself about the possible consequences for Selma Brahimi of these three questions? (The book came out two years after the interview.)

To sum up, I think María Dolores Masana should resign from the Complaints Commission and dedicate herself to further study, a lot further, like Fallaci, Halberstam and thousands of other journalists. But I don’t think she’ll do either of these things. It’s her loss. The only reason for gratitude toward Masana is that she’s allowed many people, too many, to become aware of the great distance that lies between Spain and other countries in the protection of journalists’ freedom of speech. The way FAPE’s Arbitration, Complaints and Ethics Commission works, and leaving aside the differing quality of its members, makes it a veritable relic in the world we live in. It’s time for serious reforms to bring it into line with the modern world. A complete overhaul is what’s needed. And those who handed down the original sentence must not be permitted to act on Appeals. And ANECA’s methodology, with those who ruled on the original case being the same ones to decide the outcome of appeals, must be avoided at all costs. Just as ANECA, ACAP and so many other commissions are disappearing, the best thing that the Complaints Commission can do is dissolve itself and begin from scratch.

As it’s crucial to insist on these points, I promise to return to the subject of the Commission in the near future. I realize that it’s a tedious responsibility to take on, but it’s a responsibility affecting thousands of journalists and taxpayers.