By Editorial
Ibercampus
Linkedin
Twitter
Facebook
Email
Imprimir
WhatsApp
As of tomorrow until 26 June, young people can apply for a ticket giving them the opportunity to discover their continent from July 2018 until the end of October 2018. DiscoverEU will enable them to better understand Europe´s diversity, enjoy its cultural richness, make new friends and get a sense of their European identity. 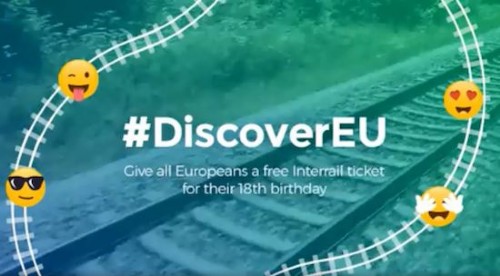 Under this new EU initiative, young people will be able to travel as individuals or as a group of maximum five people. As a general rule they will be travelling by rail. However, to ensurewide access across the continent, participants can, in special cases, use alternative transport modes, such as buses or ferries, or, exceptionally, planes. This will ensure that young people living in remote areas or on islands part of the EU also have a chance to take part. As 2018 is the European Year of Cultural Heritage, those traveling will have the chance to participate in the many events that are being organised all over Europe.

Applicants will need to provide their personal data as well as details about the trip they are planning to make. They will also need to complete a 5-question quiz, linked to the 2018 European Year of Cultural Heritage, EU initiatives targeting young people and the upcoming European Parliament elections. Finally, they will need to answer an additional question on how many young people they think will apply for this initiative. The replies will allow the European Commission to select the applicants. Once this is done, participants need to start travelling between 9 July and 30 September 2018. They can travel for up to 30 days and can visit up to 4 foreign destinations.

With a budget of €12 million in 2018, DiscoverEU is expected to give at least 20,000 young people the opportunity to travel around Europe this year. Every EU Member State has been allocated a number of travel passes, based on the share of its country's population compared to the overall population of the European Union. The first application round, launched tomorrow, will allow at least 15,000 recipients to explore their continent. A second application round with at least 5,000 tickets will take place in autumn 2018. The European Commission intends to develop the initiative and has therefore included it in its proposal for the next Erasmus programme. If the European Parliament and the Council agree to the proposal, an additional 1.5 million 18 year olds are expected to be able to travel between 2021 and 2027, supported by a budget of €700 million.

DiscoverEU is an EU initiative based on a proposal from the European Parliament, which secured its funding for 2018 through a Preparatory Action. The initiative focuses on young people turning 18, as this marks a major step to adulthood.

The European Commission would like to hear from the young travellers and will encourage them to share their experiences and adventures. That is why, once selected, the participants will be part of the DiscoverEU community and become ambassadors of the initiative. They will be invited to report back on their travel experiences, for example through social media tools like Instagram, Facebook and Twitter, or by providing a presentation at their school or their local community.