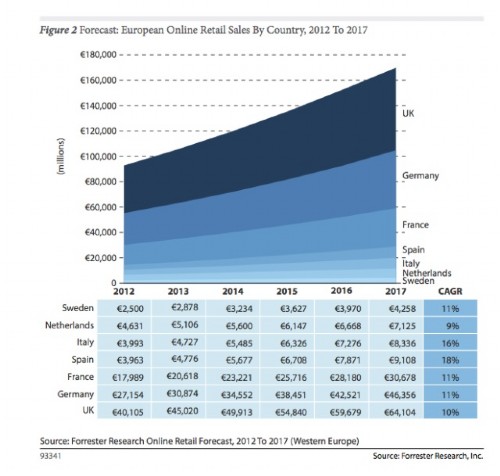 The forecast, which looks at 17 countries across Europe, estimates an 11 percent compound annual growth rate, fueled by the usual advantages of shopping online, such as saving time, money and finding products that simply aren’t available offline.

Forrester’s report notes: "Consumers are more likely to use their phones not only to research purchases — both to learn about products and store options — but also to find the best price for a given item. But it’s not just phones that drive retail web traffic; virtually all retailers report that traffic to their sites from tablets spikes during evening prime-time hours, when consumers are in a leisure state of mind. This also suggests incremental web sessions and conversions, because web retail traditionally spikes not in the evening, but during business hours."

Despite their poor economic outlook at the moment, Forrester predicts that much of this growth will be attributed to Spain and Italy. Spain is expected to hit €9.1 billion in 2017, equal to 18 percent annual growth, while Italy will rise to €8.3 billion, with 16 percent growth.

The UK is on the lower end with 10 percent yearly growth, although it’s important to note that it’s starting from a base of €40.1 billion in 2012 – a total sales figure more than ten times higher than that found in Italy or Spain.

In its European forecast, Forrester includes a breakdown by country of online retail spend — noting there is considerable variation in the landscape across key markets in Europe. Despite this, it’s projecting from 2012 to 2017 of between 9% at the low end, for the Netherlands, jumping up to 18% and 16% for Spain and Italy respectively, the fastest growing European markets over the forecast period: