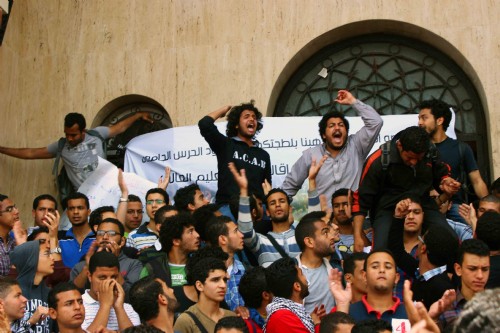 A Cairo court is due to rule on Monday on whether Morsi´s Muslim Brotherhood should be dissolved, a verdict which could trigger more protests and violence. Nearly 1,000 people were killed after the army ousted Morsi in July after mass protests.

There had been concern that the political turbulence that Egypt has seen since Morsi’s ouster in July would affect university life. Ongoing protests, security crackdowns and the imposition of a daily curfew all threatened to disrupt the annual ritual of a new academic year.

A few hundred students responded to Islamist calls and held a protest on the huge campus in Giza Sunday morning, chanting against the police and in support of Morsi.

Morsi supporters staged small protests in universities in cities including Cairo and Alexandria, and students were arrested across the country, media and security sources said. There was no figure available for the number of arrests.

Eleven students were injured in clashes in Morsi´s home town, Zagazig, according to the website of the Al-Masry Al-Youm daily.

“Down, down with the rule of the coup,” dozens of pro-Morsi students at Cairo University chanted, witnesses said.

Seventeen-year-old student Sarah Adel Ibrahim was handed to authorities by residents of El-Menoufia, a town in the Nile Delta, after she wrote “down with military rule” on the walls of a school, the state-run Al-Ahram news website said.

Two high school students were arrested in the city of Marsa Matrouh for distributing flyers calling on students to boycott school in protest at the “coup,” a security source said.

“The two students were caught distributing flyers accusing the army and police of being killers,” the source said.

Over 2,000 Islamist activists, mostly from Morsi´s Muslim Brotherhood, have been arrested in the past two months.