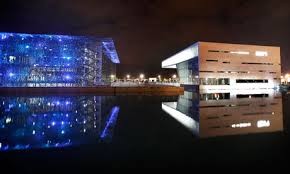 After more than a decade of delays and political wrangling, today will see the grand opening by François Hollande of Mucem, France´s new Museum of European and Mediterranean Civilisations.

The €191m project is the first museum in the world dedicated to Mediterranean civilisations and culture, and the first standalone French "national museum" ever to be located outside the centralised cultural grandeur of Paris.

The museum inherited a vast collection from Paris´s old Museum of Popular Arts and Traditions, an ethnographic and folklore museum once known as the Louvre of the people.

Central to the rebelliousness of the project was the building´s provocative designer, Rudy Ricciotti, the enfant terrible of French architecture. Born in Algeria, the French architect said he carried the Mediterranean curse of perpetual travel, "a fracture which never heals".

The museum is built on Marseille´s disused pier, where migrants often had their first glimpse of the city, and a rooftop walkway links it to the 17th-century Fort Saint-Jean, open to the public for the first time.

Ricciotti described his building full of dappled, fragmented light as a "vertical kasbah", an "architecture of resistance against imperialist mythology". He said it would restore calm to Marseille after the city had taken such a whipping in the national media in recent years.