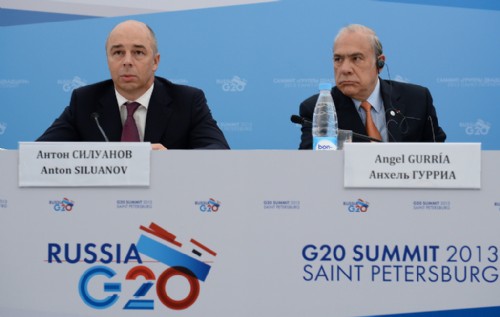 Endorsed by G20 Leaders in 2012, the High-level Principles on National Strategies for Financial Education complement the series of recommendations and standards already produced by the OECD and its INFE.National strategies for financial education are increasingly being put into place by policy makers worldwide to address the financial literacy needs of their populations, say oficial documents. Currently, 45 countries, both developed and emerging, have implemented or are designing such a strategy (see maps) .

An increasing amount of attention and resources are being spent on financial education by governments and public authorities worldwide. As the amount of resources spent has increased, so has the importance of ensuring the efficiency and relevance of these programmes and their long term impact. In this respect, the establishment of co-ordinated and tailored strategies at national level has been widely considered to be one of the best means to achieve these efficiency goals while avoiding duplication of resources and efforts. However such national endeavours have often proved to be challenging, notably due to limited long-term commitment from stakeholders, difficult co operation between them, competing interests and mandates, lack of financial and in-kind resources and other implementation issues.

The importance of financial education has increased over the past decade, including as a complement to financial consumer protection and inclusion with a view to supporting financial stability and individuals’ financial well-being. Financial literacy in particular has come to be acknowledged as an essential life skill for individuals as a result of financial market developments and demographic, economic and policy changes.

In a growing number of countries, larger shares of the population have access to basic transaction products than in the past. At the global level, the number of new deposit accounts created in commercial banks increased from 2005 to 2010, with about 30-50 new accounts per 1000 adults every year in 2008-2010 (Ardic et al., 2012). Moreover, consumers enjoy greater access to a variety of credit and savings instruments provided by different entities, from on-line banks and brokerage firms to community-based groups.

At the same time, financial markets have become more sophisticated and new products are offered to retail consumers. Deregulation of financial markets and the reduction in costs determined by developments in information technology and telecommunications have resulted in a proliferation of new financial products tailored to meet very specific market needs. Even simple products such as savings accounts are now offered in a variety of forms and with different characteristics. This increase in the sophistication of products and in the offer means that relatively straightforward products might become complex to the average consumer, as they often require an understanding of financial concepts such as debt maturity, durations, pay-out options and other options. In both developed and emerging economies, facilitated access to a range of credit options by formal and non-formal institutions have lead to worrisome overindebtedness levels among parts of the population. In emerging economies, the new middle classes are often first-time investors and need the instruments to navigate financial markets and products.

Worldwide, individuals also tend to display limited financial skills. While sizeable shares of the population across different countries appear to be relatively good at short-term money management, other behavioural aspects are more problematic. These include the lack of active and long-term savings in formal financial products, excessive reliance on credit (including to make ends meet), and difficulties in choosing adequate financial products, as well as in taking informed financial decisions.

Growing evidence of what works

The evaluation of financial education programmes is crucial to understanding which programmes are effective, to identifying areas for improvement and to supporting the efficient use of resources. Evaluation evidence is particularly relevant for national strategies, as it can help policy makers both identify the most efficient programmes during mapping exercises and support future funding decisions. Furthermore, when robust evaluation evidence can be generalised to a wider population, it becomes possible to predict the overall impact of a programme on a much larger scale. Evaluation can thus provide sound evidence to better define future policy targets and delivery tools.
Evaluation of programmes is still limited, but is steadily increasing. Thanks notably to the instruments developed in the context of the Russian Trust Fund for Financial Literacy and Education (OECD/INFE, 2013c; World Bank, 2013a), more national strategies now include evaluation of programmes as an essential component of roadmap and programme design. It has also been possible to gather encouraging evidence on the positive effects of well-designed financial education programmes in a variety of settings and on different target audiences (as in Brazil, Italy and Spain for the pilot programme in schools).

Five modalities of involvement of the private sector

The analysis conducted by the OECD/INFE identified five modalities of involvement of the private sector in the activities carried out by public authorities in financial education, notably in the context of national strategies. These are: