Gates encouraged investment in technology as way to improve education 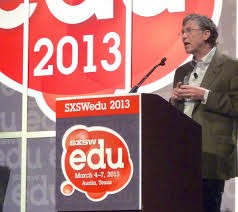 Microsoft founder Bill Gates says tougher standards and more testing have not helped students get a better ranking against their peers in other developed countries.

But Gates believes the next decade will truly revolutionize our whole perception and approach to education. He said that technology will be the catalyst for that change.

“The power of the digital platform is just going to keep getting better and better – whether it’s for the education software or for anything else,” he said. “So, that’s a great wind behind our back – that power.”

Students bringing digital devices to class. Teachers sharing lessons on the Internet. Expert educators giving advice online. Education technology can be used to enhance instruction and increase engagement and some of the “great innovators” already are using technology that way, Gates told about 2,400 people at a ballroom at the Austin Convention Center.

The growing use of handheld devices and social media among students is creating a technology tipping point for schools that could completely break down the barriers between teaching platforms within five to 10 years, Bill Gates said Thursday.

Tablet computers, smartphones, e-readers, digital textbooks and the accessibility of digital video including YouTube are playing major roles in changing the way students are learning.

Digital video exercises incorporated into textbooks online are blurring the line between teaching and assessment to the extent that there really isn´t a boundary anymore between the two, the Microsoft co-founder and chairman said.