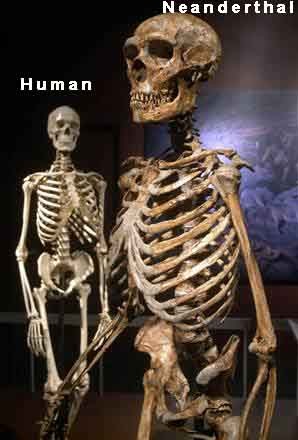 How Neanderthals died out while modern humans thrived has long fired debate among anthropologists. According to the study, published in the Proceedings of the Royal Society B, bigger-eyed and larger-bodied Neanderthals required more brain space devoted to the visual system and basic body functions, leaving less area for what co-author Robin Dunbar called "the smart part."

"Since Neanderthals evolved at higher latitudes and also have bigger bodies than modern humans, more of the Neanderthal brain would have been dedicated to vision and body control, leaving less brain to deal with other functions like social networking," study researcher Eiluned Pearce said in a press release from the University of Oxford.

Dunbar, a professor of evolutionary psychology at the University of Oxford, and colleagues Eiluned Pearce and Chris Stringer compared the skulls of 32 anatomically modern humans and 13 Neanderthals. The skulls date to 27,000 to 75,000 years ago. The researchers noticed that Neanderthals had significantly larger eye sockets.

Neanderthals also tended to be shorter than humans, which again was an adaptation to colder climates. Shorter stature reduces heat loss through the extremities.

Neanderthals in Europe also "developed a very confrontational and dangerous style of hunting, and were very dependent on a heavy meat diet," Dunbar shared. "Modern humans (in Africa) developed the bow and arrow, as well as spear throwers, which allowed hunting at arms’ length and often focused on smaller prey."

As for what happened to the Neanderthals, some researchers believe that they were simply absorbed into the modern human population. There is evidence that, as numerous humans migrated north into Europe, they interbred with Neanderthals.

Another theory, supported by this new study, is that Neanderthals went extinct because they were less capable of forming larger social networks. Pearce theorized that "smaller social groups might have made Neanderthals less able to cope with the difficulties of their harsh Eurasian environments because they would have had fewer friends to help them out in times of need."

She continued, "Overall, differences in brain organization and social cognition may go a long way towards explaining why Neanderthals went extinct whereas modern humans survived."

Dunbar further thinks that new diseases brought in by humans could have hurt Neanderthals. He said, "It was clear that, by the end, they were struggling to maintain a foothold in Ice Age Europe, having been squeezed down into the southern appendages of Europe (in places like Spain and Italy)."

The bilingual brain calculates differently depending on the language used

´Waves´ of neural activity give new clues about Alzheimer´s