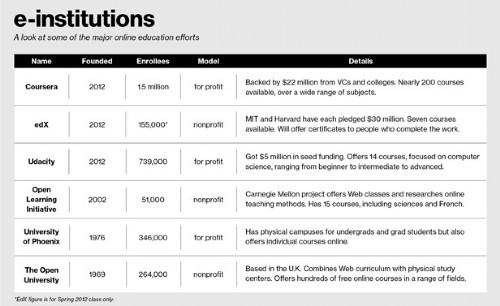 MOOCs are online college courses that ultimately aim to make elite education available to all. Unlike most online colleges, they generally do not give credit or confer diplomas, but make up for it with courses of quality and prestige not found in any other form of distance education. The courses aim at large-scale participation and open access via the web. MOOCs are a recent development in distance education using open educational resources. They are similar to college courses, but typically do not offer academic credit. Other forms of assessment or certification may be available including those based on learning analytics for online environments.

Coursera, perhaps the most prominent company offering online courses, was founded in 2012 by two computer science professors from Stanford. It offers courses from 62 universities, including Stanford, Brown, Caltech, Columbia, Johns Hopkins, Princeton, the University of California system, and many other top-tier universities. Edx, another Palo Alto-based company, founded in 2011, offers courses from MIT, Harvard, UC Berkeley, and Georgetown, among others. You can study hundreds of different subjects; most deal with technology, science, or math, but you can also take courses in philosophy, ancient Greek history, and a multitude of other humanities subjects.

The online education industry has soared over the past five years. According to market research group IBISWorld, it grew a whopping 18.6% between 2008 and 2013.

Not all online courses are good. Indeed, some are dodgy. In 2012, NSW Fair Trading received an average of 10 complaints a month. Most complaints were about issues such as a lack of technical support, people chasing refunds when the provider had closed down, study material that never arrived and misrepresented course accreditation.

The University of Melbourne was the first university in Australia to offer a Coursera program. The university’s professors take students through six-week courses on subjects including Principles of Macroeconomics, Generating the Wealth of Nations, Climate Change and Discrete Optimisation. These are free study subjects open to anyone with internet access.

Some training experts say the courses may not deliver all that participants expect.

So far, employers are still looking for formal qualifications when hiring. For the moment, the value lies in the way they can expand our understanding of certain subjects: a beginning, not an end. Online courses could offer hope to millions of people who cannot attend traditional colleges.