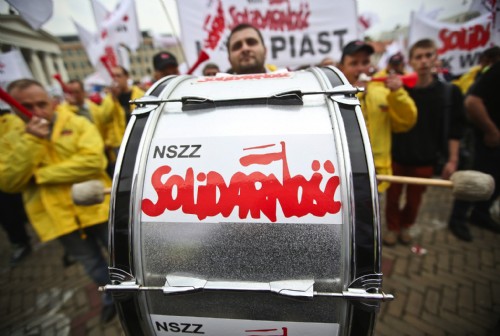 Protesters shouted "Prime Minister, we´re coming to get you," while a union member leading a rally in front of the Economy Ministry demanded elections be held before the next ones are due in 2015.

Prime Minister Donald Tusk teeters on the brink of losing its parliamentary majority. Mr. Tusk said on Tuesday he was ready to meet with the unions "but it would be hard to expect me to schedule talks with anyone about how he plans to topple me."

The protesters want higher pay as well as improved public services such as health care and education.

Poland´s average take-home pay is equivalent to some 800 euros a month, way below the European Union average, despite more than two decades of uninterrupted growth. Poland´s relatively low wages have been partly responsible for encouraging west European companies to relocate here to cut their labor costs, boosting the country´s exports and economic output.

The Polish economy is expected to gradually recover. The National Bank of Poland expects growth to pick up to 2.4% in 2014 from 1.1% this year—some of the worst results in years.