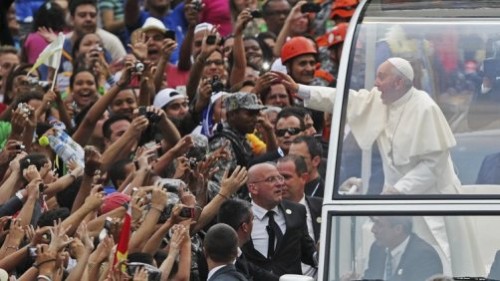 Pope Francis returned Monday to South America on his first official trip since becoming pontiff, thrilling a picture-taking, flag-waving, dancing and singing crowd of thousands energized by the breath of fresh air he has brought to the Vatican.

The pope´s remarks have particular relevance to Brazil, where he will take part in events marking World Youth Day. Joblessness among Brazilian youths has risen to 20 percent, the U.S. Agency for International Development says. In northern parts of the country, the unemployment rate among young would-be workers is 52 percent.

Speaking to journalists aboard his flight to Brazil, the pope said the economic situation could mean "we have the risk of having a generation that did not have work," Vatican Radio reported. "Young people today are in crisis," in an apparent reference to the continuing economic crisis across Europe.

In a speech soon after his arrival, the Pope urged young Catholics to "make disciples of all nations".

"I came to meet young people coming from all over the world, drawn to the open arms of Christ the Redeemer," he said at the governor´s palace, referring to Rio´s famous vast statue of Jesus.

More than a million young Catholics are expected to gather in Rio for World Youth Day, which takes place every two years, and is a celebration of the Catholic faith.

The Argentina-born Pope – who became head of the Catholic Church in March – is due to lead a prayer service on Copacabana beach on Thursday. He will also visit one of Rio´s shanty towns.

74% of Europeans want EU to do more on migration policies

Is Rio ready for Olympic Games?