By Editorial
Redacción
Linkedin
Twitter
Facebook
Email
Imprimir
WhatsApp
President Barack Obama announced yesterday a plan to evaluate universities in terms of tuition fees and the number of students completing their studies in order to provide federal funding to schools that meet those parameters. 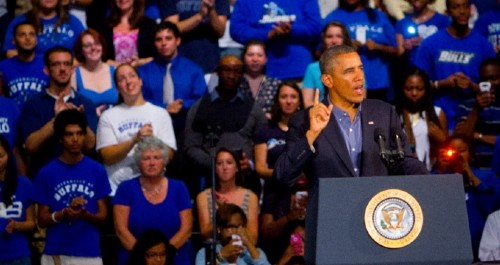 Speaking before an audience of thousands at UB’s Alumni Arena on Thursday, President Barack Obama announced reforms in Education.

The initiative, announced by Obama in a speech at the University of Buffalo (New York), would create a new grading system from academic year 2015 focused on criteria such as the average cost of tuition, student debt, rates graduation and the percentage of low-income students.

“We understand that in the face of greater and greater global competition in a knowledge-based economy, a great education is more important than ever. A higher education is the single best investment you can make in your future,” Obama said in the speech, of the first bus tour stop. "Higher education can not be a luxury.´s ," added the president.

Some of the reforms Obama is proposing will require action from Congress, while others can be enacted through the executive branch. Obama’s plan includes:

This website uses cookies to improve your experience while you navigate through the website. Out of these, the cookies that are categorized as necessary are stored on your browser as they are essential for the working of basic functionalities of the website. We also use third-party cookies that help us analyze and understand how you use this website. These cookies will be stored in your browser only with your consent. You also have the option to opt-out of these cookies. But opting out of some of these cookies may affect your browsing experience.
Functional
Functional cookies help to perform certain functionalities like sharing the content of the website on social media platforms, collect feedbacks, and other third-party features.
Performance
Performance cookies are used to understand and analyze the key performance indexes of the website which helps in delivering a better user experience for the visitors.
Analytics
Analytical cookies are used to understand how visitors interact with the website. These cookies help provide information on metrics the number of visitors, bounce rate, traffic source, etc.
Advertisement
Advertisement cookies are used to provide visitors with relevant ads and marketing campaigns. These cookies track visitors across websites and collect information to provide customized ads.
Others
Other uncategorized cookies are those that are being analyzed and have not been classified into a category as yet.
Necessary Always Enabled
Necessary cookies are absolutely essential for the website to function properly. These cookies ensure basic functionalities and security features of the website, anonymously.
SAVE & ACCEPT
<link rel="stylesheet" id="cookie-law-info-table-css" href="/wp-content/plugins/cookie-law-info/public/css/coo