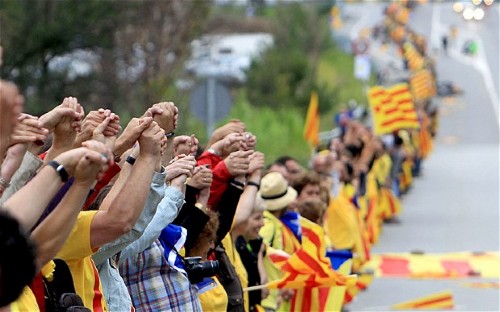 Demonstrators raised their joined hands through cities and along rural roads orming a human chain for 400 kilometers.

The human chain is organized by the grass-roots, citizen-led Catalan National Assembly, which last year on September 11 — Catalonia´s national day — turned out an estimated 1.5 million people in Barcelona, the regional capital.

A deep recession and cuts in public spending in Catalonia, a wealthy industrial region in the northeast that accounts for a fifth of Spain´s economic output, have stirred discontent with the central government in Madrid.

Polls show backing for secession has risen steadily in Catalonia, with some registering support as high as 50 percent.

Growing separatism in the region of 7.5 million people has become a headache for Spanish Prime Minister Mariano Rajoy, who is mired in a corruption scandal and trying to pull Spain out of recession while pushing through unpopular spending cuts.