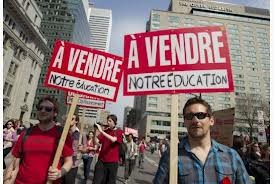 On Sunday, the Quebec University Student Federation (FEUQ) – a key player in last spring´s student crisis — and the Parti Québécois´ youth wing outlined their agendas for the higher education summit.

At a joint news conference, the two groups said they will be trying to find solutions to counter student debt.

Martine Desjardins, the FEUQ´s president, said reducing student debt is one of the key items on the federation´s wish list because it helps improve students´ living conditions and opens access to education.

About 350 people will be taking part in the meetings.A group of people representing 46 organizations is criticizing the PQ for the way it organized the meetings and says the summit´s agenda is unlikely to yield positive results.

The collective of groups against tuition increases voiced its opposition to this week´s summit on higher education during a news conference at the University of Quebec in Montreal (UQAM) on Sunday.

Students at anglophone colleges say they are being left out of the summit meetings because they are not part of larger umbrella associations like the FEUQ or the Quebec College Student Federation (FECQ).

The Coalition of Anglophone CEGEPs, which represents some of the anglophone colleges, is not recognized as a federation or umbrella union and was not invited to attend the summit.

The Quebec Summit on Higher Education began on Monday, following months of planning and protesting. Several small demonstrations were held during the day, with a larger protest at night that, while largely peaceful, ended with two arrests.

A major demonstration organized by the Association pour une solidarité syndicale étudiante has been planned for tomorrow.

The EU and Canada signs the Comprehensive Economic and Trade Agreement