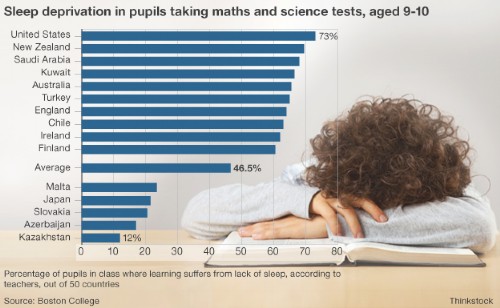 It is a particular problem in more affluent countries, with sleep experts linking it to the use of mobile phones and computers in bedrooms late at night.

The international comparison, carried out by Boston College, found the United States to have the highest number of sleep-deprived students, with 73% of 9 and 10-year-olds and 80% of 13 and 14-year-olds identified by their teachers as being adversely affected.

In literacy tests there were 76% of 9 and 10-year-olds lacking sleep. This was much higher than the international average of 47% of primary pupils needing more sleep and 57% among the secondary age group.

Other countries with the most sleep-deprived youngsters were New Zealand, Saudi Arabia, Australia, England, Ireland and France. High-performing Finland is also among the most lacking in sleep.

Countries with the best records for getting enough sleep include Azerbaijan, Kazakhstan, Portugal, the Czech Republic, Japan and Malta.

The analysis was part of the huge data-gathering process for global education rankings – the Trends in International Mathematics and Science Study (TIMSS) and Progress in International Reading Literacy Study (PIRLS).

These are among the biggest international benchmarks for education standards, based on tests taken by more than 900,000 pupils in primary and secondary schools in more than 50 countries and regional administrations.

The rankings of results for maths, science and reading were published at the end of last year, with Asian education systems dominating the top of the tables.

So the tests were accompanied by questionnaires for teachers, pupils and parents about sleep patterns. And this information was compared with pupils´ test results, so that the performance in maths, science and literacy could be compared with levels of sleep.

"I think we underestimate the impact of sleep. Our data show that across countries internationally, on average, children who have more sleep achieve higher in maths, science and reading. That is exactly what our data show," says Chad Minnich, of the TIMSS and PIRLS International Study Center.

"It´s the same link for children who are lacking basic nutrition," says Mr Minnich, based at the Lynch School of Education, Boston College. "If you are unable to concentrate, to attend mentally, you are unable to achieve at your optimal level, because your mind and body are in need of something more basic.

"Sleep is a fundamental need for all children. If teachers report such large proportions of children suffering from lack of sleep, it´s having a significant impact. "But worse than that, teachers are having to modify their instruction based on those children who are suffering from a lack of sleep.

That means that even the children who are getting enough sleep are still suffering from this sleep-related dumbing-down.

Getting a good night´s sleep isn´t going to transform an underperforming country into an education superpower. For instance, the least sleepy pupils seem to be in Azerbaijan, but they are still considerably behind the most sleep-deprived pupils in Finland.

But researchers say that it does show how differently individual pupils might be placed on the ability spectrum, with lack of sleep representing the difference between being high-performing and average.

There are also big changes as pupils get older. Younger pupils in South Korea have among the lowest levels of sleep deprivation in the world, but in secondary school they have some of the worst problems.

There are differences within countries too. At the level of US states, among secondary pupils Colorado has a much worse problem with lack of sleep than Massachusetts.

What the study does not show is why young people are missing out on sleep – or why more technologically advanced countries seem to have the biggest difficulties.

But sleep experts point to a particular problem due to technology in children´s bedroom – specifically the use of screens on smartphones or laptops late at night.

It isn´t only that young people are kept awake by messaging their friends or using the internet. The light from the screen, held close to the face, is physically disruptive to the natural onset of sleep.

But there is good news. If you start getting enough sleep on a regular basis, the loss to learning can be reversed.