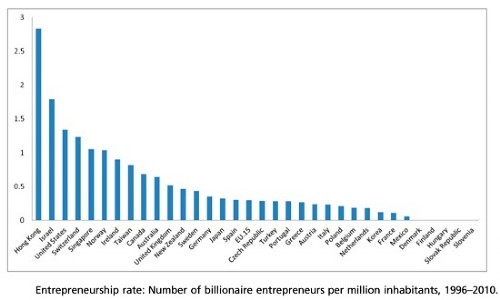 The study, ‘Small business activity does not measure entrepreneurship’, was published by PNAS, the National Academy of Sciences in the USA.  Magnus Henrekson and Tino Sanandaji found, the higher the rate of self-employment in a country, the lower the rate of billionaire entrepreneurs. Countries with high incomes, low taxes, venture capital investment and low regulatory burdens were more likely to have game-changing entrepreneurs, but less likely to have high rates of self-employment.

Henrekson and Sanandaji wanted to test whether this was a reasonable assumption, and so scoured the Forbes billionaires rich list for 966 entrepreneurs who became rich by founding new firms. These, the authors write, are “high-impact entrepreneurs”, who shook up their industries and amassed a fortune in the process. Individuals who made their fortune by being hired by then start-ups, like Microsoft’s Steve Ballmer, were not counted as entrepreneurs.

After adjusting for factors like country size and wealth, the researchers then looked for a correlation between the presence of such entrepreneurs, and the rate of self-employment in a country. They found a correlation, but it went the opposite way to what you would expect. Countries with lots of successful entrepreneurs in fact had lower rates of self-employment, and not the other way round.