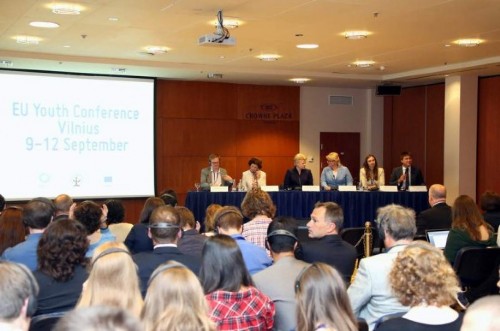 The Lithuanian Presidency together with the European Youth Forum and the Lithuanian Youth Council has organised the EU Youth Conference in Vilnius (Lithuania) from the 9th – 12th of September. This conference, which plays an essential part of the structured dialogue, focuses on the Lithuanian Presidency’s main priority in the youth field: social inclusion of young people with a particular emphasis on the inclusion of young people not in employment, education or training (NEETs).

Youth delegates and representatives of EU member states’ Ministries responsible for Youth Affairs will participate in joint discussions across seven workshops. Such discussions are based on the compiled outcomes of vast consultations with young people, youth organisations and public authorities carried out over four months in all 28 EU member states and at the pan-European level by International Non-Governmental Youth Organisations (INGYOs). Together delegates will make proposals for the better inclusion of NEETs in the areas of educational reform, improving information and career guidance, facilitating the transition from education to employment, improving the labour market for young people, supporting young people’s autonomy, developing more cross-sectorial cooperation and enhancing the role of youth organisations in active inclusion measures, such as the Youth Guarantee.

Algimanta Pabedinskienė, the Minister of Social Security and Labour of the Republic of Lithuania, has greeted this conference and stated that there is no coincidence that social integration of NEETS has been chosen as one of the main priorities of Lithuanian Presidency because these people need urgent aid in reintegrating into education and labour market. Therefore she is rejoiced that at the EU Youth Conference the youth itself together with youth organisations as well as organisations working with youth and representatives of the ministries of all the EU member states together will look for solutions and will offer suggestions on enhancing the social inclusion of NEETs.

According to Algimanta Pabedinskienė, all member states need to put their effort in bettering the youth employment situation in Europe. “For better youth employment in Lithuania we apply a package of measures funded by both national and European Social Fund. As well in the nearest future we will launch young people opportunities in labour market package, the intense long-term assistance for NEETs program and National Youth Volunteering Program” – said the Minister.

European Youth Forum President, Peter Matjašič, welcomed this Conference’s special focus and stated “Young people need concrete actions based on coordinated and meaningful strategies. More investment in young people is the only way to reverse the current increasing tendency of social exclusion. The EU institutions and member states must therefore urgently take action for the full inclusion of young people in society”.

Lithuanian Youth Council President, Loreta Senkute expressed that “social exclusion can only be overcome if the EU institutions and member states implemented integral actions. There is a need to emphasise not only young people’s unemployment but also to improve their participation in organisations and civic life, develop their social competences and to produce the synergy between formal and non-formal education”.

The agreed discussion themes based on the EU-wide consultation findings are:

The EU Youth Conference will conclude with the adoption of Joint Conclusions on 12th September. These conclusions will contribute to the draft Council Conclusions on enhancing the social inclusion of young people not in employment, education or training that are expected to be adopted by the EU Member States’ Ministers for Youth in November 2013. Additionally, the conclusions will provide input to the draft Council Resolution on structured dialogue with young people regarding social inclusion, which will be adopted under the upcoming Greek Presidency.