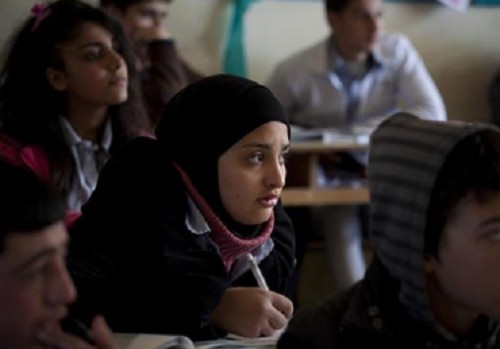 A roundtable discussion on the educational needs of Syrian refugee children in Lebanon is among events on the agenda of United Nations Special Envoy for Global Education, and former Prime Minister of the United Kingdom of Great Britain and Northern Ireland, Gordon Brown, during the 68th session of the United Nations General Assembly. Mr. Brown’s role as Special Envoy includes garnering support for Secretary-General Ban Ki-moon’s Global Education First Initiative, which strives to achieve quality education for all children.

That goal is in jeopardy in Lebanon, where, despite a lack of formal refugee camps, more than 756,630 Syrians are now staying – in rented accommodations, in the homes of Lebanese families, in informal tent settlements. Far flung across the country, these refugees are proving difficult to reach with humanitarian assistance, including education services.

Mr. Brown believes that calling for educational needs to be met even in times of conflict is a vital part of the solution, just as health needs are considered no less a priority during conflict.

Now in its third year, the Syrian conflict continues to escalate with no end in sight. More than 4.25 million people have been displaced internally, and of the many who have been faced with the choice between remaining in the country or fleeing, indefinitely, to safety, more than 2.1 million have chosen the latter. Now living in Egypt, Iraq, Jordan and Turkey, as well as in Lebanon, more than half of these refugees are children.

Before the crisis, the rate of primary school enrolment in the Syrian Arab Republic had surpassed 90 per cent. But, education has not been spared, amid the disintegration of other vital infrastructure. During the past school year, almost two million Syrian children aged 6–15 dropped out of school because of conflict and displacement. While many have become refugees, more than half – one million children – remain out of school inside the Syrian Arab Republic.

In areas with educational facilities, security concerns often leave parents reluctant to send their children to school. And still other children arrive in the classroom to find that psychological stressors have compromised their potential to thrive there.

UNICEF has long been at the forefront of efforts to ensure that Syrian children remain in school. Even in sites of protracted violence, remedial classes are helping children bridge the gaps caused by interrupted school attendance. School clubs throughout the country are providing education and psychosocial support.

Summer camps in Lebanon have helped Syrian children overcome the language barriers they face in Lebanese classrooms, where mathematics and science are taught in English or French.

In Turkey, UNICEF has supported training for educators, who are themselves struggling to meet the unique needs of refugee children.

Earlier this month, as the start of a new academic year approached in the Syrian Arabic Republic and neighbouring countries, UNICEF boosted efforts to ensure children return safely to learning. In Jordan, a Back to School campaign called on peer educators as well as community and religious leaders to promote school enrolment.

Amid UNICEF’s ongoing emergency response in Iraq, local children have also pitched in, raising enough money to buy school supplies for their Syrian peers in the new Arbat refugee camp.

Despite these and other efforts, needs are increasingly critical. Of the US$470.65 million UNICEF requires for response in the Syrian Arabic Republic and neighbouring countries, education remains the most underfunded sector, with over 63 per cent of needs unmet.

A Syrian girl attends a UNICEF-supported school in Jordan. Of the US$470.65 million UNICEF requires for response in the Syrian Arabic Republic and neighbouring countries, education remains the most underfunded sector.

As the conflict rages on, denying more children their right to education, it is hampering not only their intellectual growth, but also their future opportunities. When it begins, someday, the Syrian Arab Republic’s road to recovery will be long – and an educated citizenry is what the country will most require as it finds its way.

Millennium Development Goal 2 is Achieve universal primary education. Among the key interventions necessary to ensuring that, by 2015, children everywhere, boys and girls alike, will be able to complete a full course of primary schooling, is to ensure safe and protective access to quality education in humanitarian emergencies.

450,000 students and teachers use the EU´s SELFIE tool for schools