Teachers protest in Athens against a bill to eliminate public jobs 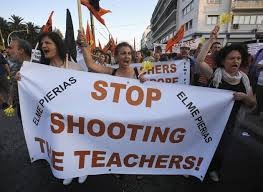 After midnight on Wednesday, 153 lawmakers out of the 293 present voted in favor of the bill, whose passage was required to unlock nearly 7 billion euros ($9.2 billion) in aid from European Union and International Monetary Fund lenders.

The bill includes deeply divisive plans for a transfer and layoff scheme for 25,000 public workers – mainly teachers and municipal police – that had triggered a week of almost daily marches, rallies and strikes in protest.

Athens has been limping along on two bailouts worth over €240 billion since 2010, which it has secured at the price of wage cuts and tax rises that have triggered a six-year recession and sent unemployment to 27%.

The latest bill agreed with lenders includes a luxury tax on houses with swimming pools and owners of high performance cars.

But the move that has drawn the most anger is the plan to place 25,000 workers into the layoff scheme by the end of 2013, giving them eight months to find another position or get laid off. Greece´s public sector is widely seen as oversized, inefficient and filled with patronage hires, but many Greeks believe society can no longer go tolerate cuts or tax hikes.

Uniformed municipal police, garbage collectors in orange vests and hundreds of other public sector workers have taken to the streets of Athens almost daily on motorbikes in over a week of protests, blowing whistles, honking horns and blaring sirens.