The EU spends more money in cows than in young unemployed 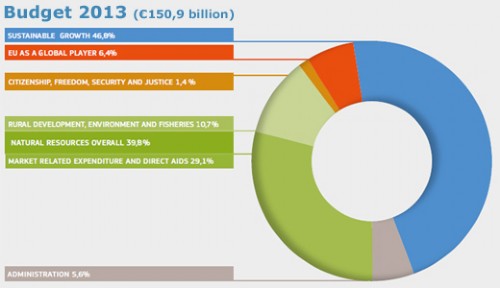 European leaders this week are deciding on how to spend the money and what are the priorities of the next EU budget for 2014-2020. This decision will have an effect on all the EU citizens, and especially on young people of Europe.

The president of the European Youth Forum, Peter Matjašič, demands that the EU funding distribution affects seriously the Education, Training and Youth Programmes. For example, the EU has decided to reduce its budget for the new “Erasmus for All”, and will reduce exchange possibilities. This measure will affect 700.000 students.

Peter Matjašič stated that the EU only invests 0.8% of its budget directly in education and youth issues. Agriculture, on the other hand  is responsible for 1.7 % of European output. According to Eurostat, the number has gone down 0.8 % since 2000. According to Eurostat, in the current Budget the EU spends €12.7 per cow and a mere €1.26 per young student.

The outcome of the latest European Council and the political agreement on the EU´s long-term budget of 27 June received a lukewarm welcome in the European Parlamaint yesterday. The plenary is to vote on the political support of the Multiannual Financial Framework 2014-2020 today.