The Future of Work

By Editorial
Ibercampus
Linkedin
Twitter
Facebook
Email
Imprimir
WhatsApp
Technology and automation are impacting jobs, wages and working conditions. While researchers, policymakers and the public struggle to grasp the consequences of this disruption, the need for concrete solutions is evident. The Future of Work analyzes trans-Atlantic labor market trends and partners with cities and regions in Europe and the United States to source innovative strategies to aid the transition to the future of work. 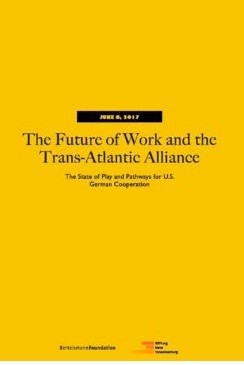 he past year has brought momentous disruption to the trans-Atlantic alliance. From the ascent of President Trump, to Brexit, to the rise of populist parties in France, Germany and Austria, voters have taken a cudgel to the status quo. Dumbfounded, leaders on both sides of the Atlantic have set off to explore why their platforms – and candidates – failed to connect.

Running parallel to this soul-searching is an often-invisible undertow of technology and automation that has bred economic anxiety and amped-up extreme positions, making it increasingly difficult for policymakers to ease voters’ angst. As once-settled areas of trans-Atlantic cooperation come into question, policymakers must redouble their efforts to find common cause that drives the relationship forward. With disaffected workers already disrupting politics at the ballot box, our shared transition to the future of work demands not only our attention, but bold and creative pathways forward.

The Great Future of Work Paradox

In many ways, the advanced economies of the United States and Europe, fueled by hundreds of millions of relatively high-skill, high-wage workers, have the most to lose from the introduction of technology and automation – in their now-famous 2013 study, Frey and Osbourne found that 47 percent of U.S. employment and 39 percent of German employment is vulnerable to “substitution” in the coming years. Others have since argued that those predictions are far too dire, with lower percentages of workers at risk of falling prey to robots and rapidly evolving technologies.

In any event, fixation on raw numbers of jobs destroyed distracts from the impact of more nuanced – yet equally pernicious – factors, such as long-term wage and skill bifurcation. Even if the threat of job extinction is greatly exaggerated, technology and automation will greatly alter the nature, wages and conditions of future work in the United States and Europe.

Recent polling has unearthed a fascinating paradox that has in part undermined collective action to inoculate and prepare workers for the future of work. While 77 percent of American workers state that technology and automation will have an impact on all jobs, just 30 percent believe that their individual positions will suffer.

This glaring gap between the individual and the collective may explain why policymakers cater to particularly vocal groups of displaced manufacturing workers while ignoring the slower-moving but far more dangerous threats posed by stagnant wages and inequality. Today’s economic malaise has also been spawned in an era of record-low unemployment, signaling that we are unlikely to feel the full brunt of technology and automation on our workforce until the next economic downturn.

This (Trans-Atlantic) Time Really Is Different

If polarization and economic angst have roiled longstanding trans-Atlantic consensus, they have also opened exciting new possibilities for collaboration and lesson-sharing on the future of work. Taking stock, leaders from the U.S. Congress to the EU institutions and France’s National Assembly have begun to ask how they can prepare their societies for the challenges – and opportunities – associated with the future of work.

Yet, as policymakers lurch toward solutions, international cooperation has languished, with leaders instead focusing on domestic or local fixes. But technology and automation’s effects on labor markets will spill across borders, making it imperative that we share best practices and models. The potential for trans-Atlantic collaboration is immense, but there are vast differences in how Europe and the United States view – and are preparing for – the evolving nature of work.

In Europe, the state has spurred dialogue on and nascent policy responses to the future of work. For example, Germany’s Federal Ministry of Labor and Social Affairs has worked with unions, businesses and citizens to produce a ‘Work 4.0’ White Paper outlining how technology and automation are affecting not only numbers of jobs, but also the quality of future work. In France, President Macron has used reform of the labor code to push through the Scandinavian-inspired concept of “flexisecurity,” which provides generous social protections to encourage labor flexibility. Finally, Estonia has used its position at the helm of the EU Council to draw international attention to the topic.

In the United States, policymakers have dialed-in on European-inspired models of apprenticeship, portable social benefits and even universal basic income, which is being piloted in California.

However, attitudes toward work and retraining are most often viewed through the prism of individual responsibility, with an October 2016 poll finding that 72 percent of Americans believe it is up to them to cultivate the skills and education necessary to succeed in the 21st century economy. On apprenticeship, the Trump administration has sought to shift responsibility for creating and certifying training programs from the Department of Labor to trade groups and business.

Both models have strengths and weaknesses that will be debated over the coming years. For now, policymakers should explore how European and American models can benefit and borrow from one another in what is perhaps the most underappreciated – and unexplored – aspect of the trans-Atlantic relationship.

Despite their differing philosophies about how to approach the future of work, our research and convening has shown that policymakers on both sides of the Atlantic are eager to explore common solutions. Yet, misguided approaches have already proliferated. For instance, some policymakers latch on to singular, sweeping responses, such as universal basic income, which encourages path dependency and forestalls inclusive, long-term dialogue with citizens, businesses, unions and government. Understanding the basic values, models and assumptions driving responses to the future of work is a prerequisite to designing solutions. Therefore, the first best step is to outline guiding principles and shared values that can drive substantive, lasting collaboration going forward. Finally, given the scale of the challenge and the need for long-term solutions, policymakers should be encouraged to engage in international dialogue on how technology and automation are reshaping work as we know it.