The most compact folding bike ever

By Editorial
Redacción
Linkedin
Twitter
Facebook
Email
Imprimir
WhatsApp
Bike Intermodal, an EU-funded research project, has designed the bike to solve the challenge of mixed-mode or "intermodal" transport, where travellers need to incorporate several different forms of transport on their route. 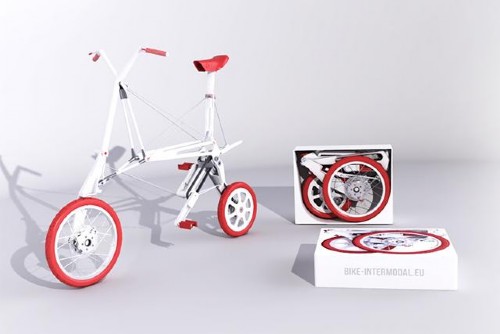 The bike – catchily named Bike Intermodal – is the product of a pan-European development team that was given a €1.58m research grant to make a lighter, more compact folding bike that would encourage more people out of cars and onto bikes and public transport.

Folding bikes are already common in Europe but the researchers have managed to miniaturise the concept by doing away with the traditional bike frame and replacing it with what the founders describe as “a sequence of three functional, collapsible, sub-assemblies” linked by high-tensile cables.

This design not only delivers a major weight saving, but also allows the bike to fold in a manner similar to an aircraft’s undercarriage – enabling it to take up less than 20 litres when folded.

The Bike Intermodal consortium involved industry partners from across Europe. One of them, Maxxon Motors, is working on a custom designed in-wheel direct-drive motor designed to add electric power to the bike without excessive weight.

The consortium, which received €1.58m in EU research funding, is now ready with a commercially-viable prototype following field studies carried out by the public transport suppliers of Italy and Slovenia.

The founders are in discussions with a number of venture capitalists and are working on reducing the weight of the finished product even further through the use of innovative materials such as graphene.

When in fully-optimised production, Belli estimates that the bike could cost €800 for a version without a motor and €1,300 for the power-assisted model.

Michael Jennings, spokesperson for European Research, Innovation and Science Commissioner Máire Geoghegan-Quinn, said: “Bike Intermodal is the kind of innovation we need to see more of in Europe, improving our quality of life and economic competitiveness.

“One of the main objectives of Horizon 2020, our new research and innovation funding programme, is to get great ideas like this one from the lab to the market. The more innovative companies we have, the better it will be for Europe´s economy.”