By Editorial
Redacción
Linkedin
Twitter
Facebook
Email
Imprimir
WhatsApp
The number of mobile lines willovertake the world population in 2015, with forecasts to end-2019 with 7.600 million broadband subscriptions and an explosion of traffic data due to consumption especially video and television from phones and tablets. 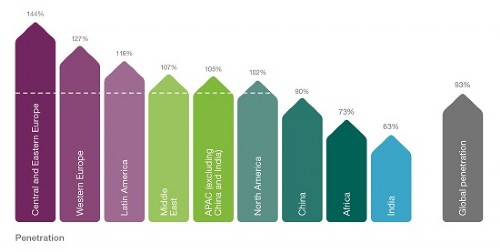 Ericsson has performed in-depth data traffic measurements since the early days of mobile broadband from a large base of live networks covering all regions of the world. The aim of this report is to share analysis based on these measurements, internal forecasts and other relevant studies to provide insights into the current traffic and market trends.

The last report from the Swedish telecom company Ericsson describes the challenges of providing sufficient app coverage for different app types in dense urban areas and indoor environments. In the June 2014 edition, the report explains how one way to serve the demand for increasing capacity and app coverage is to evolve mobile broadband networks into seamless heterogeneous networks. The study also examines how the distribution of smart mobile device categories that are connected to a radio access network impacts the user experience as well as network resource efficiency.

More use of video and mobile devices

The increased use of mobile data consumption will be noted especially in video and mobile devices from home and on the move, which will represent 50 percent of the total; machine-to-machine connections are multiplied by 4 in 2019. The report also highlights that Europe is the region with the highest level of mobile penetration in the world.

The wireless device with video are playing a very significant role in Europe. 62 percent of Germans use electronic tablet, laptop or smartphone to watch TV or video. The habit is common in Western Europe and especially in Sweden; in France, one in four respondents see home video in a ´smart´ phones more than three hours per week. In Italy and Spain, more than four hours per week.

65 percent of all phones sold in Q1 2014 were smartphones. Compared to today, a smartphone user in 2019 is expected to consume almost four times the amount of mobile data per month. This contributes to the 10-fold growth prediction in mobile data traffic between 2013 and 2019.

2019: 4G/LTE subscription divide will be wide

In 2019, LTE population coverage in Europe will be around 80 percent, but Europe will only see LTE subscription penetration of 30 percent compared to 85 percent in North America the same year. Even within Europe there will be large differences between Western Europe and Central and Eastern Europe. Population coverage for LTE in North East Asia is expected to be 95 percent by 2019, with LTE penetration levels at 45 percent. By the same year, China is expected to reach over 700 million LTE subscriptions, representing more than 25 percent of total global subscriptions for LTE.

This edition of Ericsson Mobility Report includes further analysis of how one solution to cater for the rising traffic levels and app requirements is to evolve mobile broadband networks into heterogeneous networks that leverage an evolved macro cell layer complemented with integrated small cells.

To accompany the Ericsson Mobility Report, Ericsson has created the Traffic Exploration Tool, for creating customized graphs and tables using data from the report. The information can be filtered by region, subscription, technology, traffic and device type.