The Uses of the University 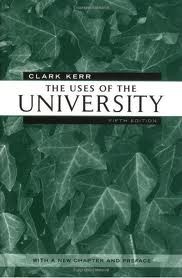 To understand where formal education is going, we must first understand where it came from and what role it served in the cultural context of society. Clark Kerr’s "The Uses of the University" , originally published in 1963 and based on his Godkin Lectures at Harvard, is arguably the most important work on the purpose of educational institutions ever published. Kerr, an economist with a historian’s sensibility, coins the term “multiversity” at the dawn of the free speech movement of the 60s and examines the role of the university as a living organism of sociopolitical thought and activity.

Clark Kerr, a towering figure in higher education. As president of the University of California, he was chief architect of the master plan that guided California public higher education for four decades and is still a national model.

"The very special genius of Clark Kerr was that he simultaneously built the world´s greatest public university system, while looking after the interests and the values of all higher education segments. For 37 years, I had the personal privilege of learning from him, particularly watching how he fought without compromise but with elegant skill to look after the interests of all segments of American society," said Barry Munitz, president and CEO of the J. Paul Getty Trust and former chancellor of the California State University system.

The book, as US Berkley’s Hanna Halborn Gray eloquently puts it, “describes the illnesses to which this organism might be prone, together with diagnoses and prognoses that might prove useful.”