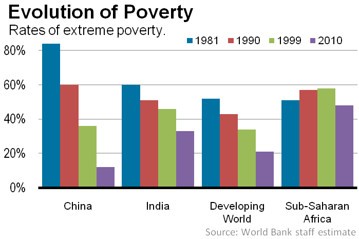 A new analysis of extreme poverty released today by the World Bank shows that there are still 1.2 billion people living in extreme poverty, and despite recent impressive progress, Sub-Saharan Africa still accounts for more than one-third of the world’s extreme poor.

“We have made remarkable progress in reducing the number of people living under 1 euro a day in the developing world, but the fact that there are still 1.2 billion people in extreme poverty is a stain on our collective conscience,” said World Bank Group President Jim Yong Kim. “This figure should serve as a rallying cry to the international community to take the fight against poverty to the next level. Our analysis and our advice can help guide the way toward ending extreme poverty by 2030, by showing where the poor live and where poverty is deepest.”

The note, “The State of the Poor: Where are the Poor and Where are the Poorest?,” using data released in the latest World Development Indicators, shows that extreme poverty headcount rates have fallen in every developing region between 1981 and 2010. And both Sub-Saharan Africa (SSA) and Latin America and the Caribbean (LAC) seem to have turned a corner entering the new millennium. After steadily increasing from 51 percent in 1981 to 58 percent in 1999, the extreme poverty rate fell 10 percentage points in SSA between 1999 and 2010 and is now at 48 percent—an impressive 17 percent decline in one decade. In LAC, after remaining stable at approximately 12 percent for the last two decades of the 20th century, extreme poverty was cut in half between 1999 and 2010 and is now at 6 percent.

However, despite its falling poverty rates, Sub-Saharan Africa is the only region in the world for which the number of poor individuals has risen steadily and dramatically between 1981 and 2010. There are more than twice as many extremely poor people living in SSA today (414 million) than there were three decades ago (205 million). As a result, while the extreme poor in SSA represented only 11 percent of the world’s total in 1981, they now account for more than a third of the world’s extreme poor. India contributes another third (up from 22 percent in 1981) and China comes next, contributing 13 percent (down from 43 percent in 1981).

Incomes rise and poverty gap narrows in most regions

This increase in incomes of the extreme poor is unfortunately not seen in Sub-Saharan Africa. Between 1981 and 2010, the average income of the extremely poor has remained essentially flat at approximately half of the 1 euro line in that region.

It is important to note that extreme poverty gap is the conceptual amount of direct additional income an average extremely poor person would need to get to 1 euro per day and is not indicative of the level of assistance required to close the gap.