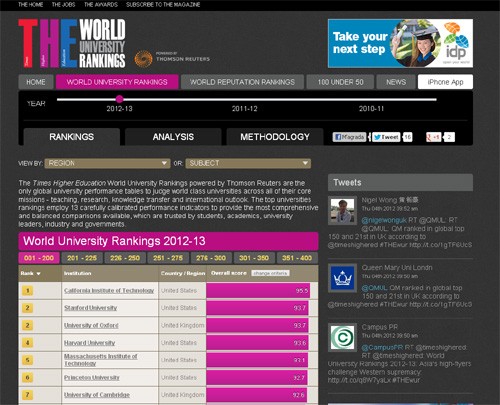 The list, topped by Harvard, MIT, and Cambridge, is based on surveys of 16,300 peer academics globally who were asked to nominate up to 15 of the best institutions of higher education in their field.

Harvard has come top, with Massachusetts Institute of Technology taking second place. The University of California, Berkeley and Stanford are in the fifth and sixth spots.

The ranking is meant to classify universities based on factors other than academics. Reputation, says, can be just as important when determining the “best” schools.

Phil Baty, editor of the rankings, said while reputation is subjective, a university’s brand is important in the increasingly competitive and globalized market for higher education.

Baty also noted that research shows a university’s ranking, over salary and location, is the most important factor in academics moving jobs. In addition, Baty said international students prioritize reputation over tuition costs and course offerings.

The Times Higher Education World University Rankings 2012-2013 powered by Thomson Reuters are the only global university performance tables to judge world class universities across all of their core missions – teaching, research, knowledge transfer and international outlook. The top universities rankings employ 13 carefully calibrated performance indicators to provide the most comprehensive and balanced comparisons available, which are trusted by students, academics, university leaders, industry and governments.