By Editorial
Redacción
Linkedin
Twitter
Facebook
Email
Imprimir
WhatsApp
Universities from just two countries – the US and the UK – comprise the top 10 of the Times Higher Education World Reputation Rankings 2014. 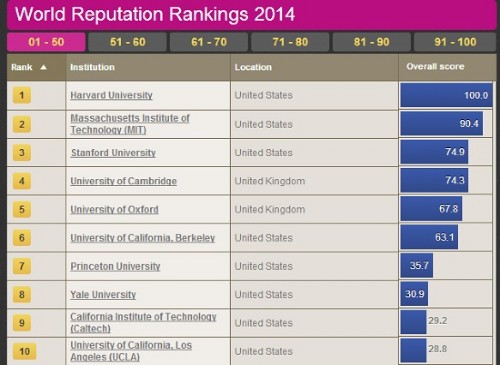 The ranking is based on an invitation-only opinion poll carried out by Ipsos MediaCT for Times Higher Education’s rankings data supplier, Thomson Reuters. The poll asked senior, published professors at universities in more than 100 countries to nominate 15 or fewer institutions in their field which they considered to have the best departments in their area of study. Some 10.500 professors responded. Here is their pick of the top 20.

Similarly to last year, a group of six “super-brands” holds a clear advantage over the rest, with Harvard University consolidating its position at the top of the table, which ranks universities based on their reputation and prestige.

The University of Tokyo, the only institution from outside the US or the UK to make the top 10 last year, drops two places to 11th.

Overall, the US strengthens its grip on the table, boasting 46 of the universities in the top 100 (up from 43 in 2013) – more than four times as many as the UK, which is the second best represented nation, with 10.

However, while the US generally sees its universities move up the table, Stanford’s rise of three places from sixth to third pushes both Oxford and Cambridge down a place. The University of Bristol, meanwhile, exits the top 100 this year, following the universities of Sheffield and Leeds, which fell out of the table in 2012 and 2013 respectively. It means the UK now has two fewer representatives than when the rankings began in 2011.

Furthermore, the UK’s two new entrants are based in London (the London Business School and the London School of Hygiene and Tropical Medicine), meaning that eight of the country’s 10 representatives are now based in the “golden triangle” of London, Oxford and Cambridge, the universities of Manchester and Edinburgh being the exceptions.

In representative terms, the US and the UK are followed by Germany, which has six institutions in the top 100. France loses two representatives, leaving it with two in the table, and the Netherlands also loses ground as Wageningen University and Research Centre drops out.

Last year’s success story, Australia, which saw two universities enter the top 100, slips back, with Monash University – a new entrant in 2013 – exiting the table, leaving the country with five representatives.

In East Asia, Japan remains the strongest performer, with five representatives, while China’s fortunes are mixed, with its top-ranked institution, Tsinghua University, slipping one place to 36th but Peking University climbing four places to 41st.

Compiled by Thomson Reuters, the World Reputation Rankings 2014 are based on responses from about 10,500 leading peer-reviewed academics in 133 countries, who were asked to nominate up to 15 of the best institutions in their field of expertise.