Unequal access and usage could hold back potential of digital economy

By Editorial
Ibercampus
Linkedin
Twitter
Facebook
Email
Imprimir
WhatsApp
Digital technologies continue to make impressive advances. Internet infrastructure is improving and the usage of digital tools is growing. The social impacts of digital innovation have also become more pronounced in diverse fields. However, progress is uneven across countries, businesses, and within societies according to a new OECD report. 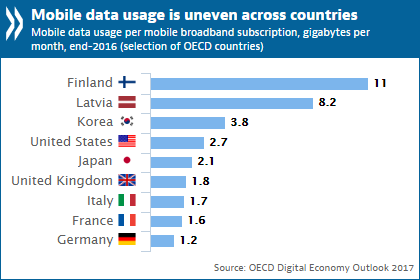 Broadening access to digital opportunities and helping those lagging behind to catch up would increase the benefits of the digital transformation and help ensure they are widely shared across economies and people, according to a new OECD report.

“The digital transformation is not happening at the same pace across countries, companies and households, and this translates into unequal opportunities,” said OECD Secretary-General Angel Gurría, presenting the report at a meeting of the OECD Global Parliamentary Network in Paris. “We must empower our citizens and businesses for the digital world by providing everyone with affordable access to digital tools and the skills to use them fully.” Read the full speech.

The OECD Digital Economy Outlook 2017 says government policy has not kept pace with the digital innovation and transformation of economies and societies led by big technology firms. It calls on countries need to step up their efforts, invest more in education and skills and encourage greater use of advanced technologies like big data analysis and cloud computing, in particular by small businesses, to make the digital shift more productive and inclusive.

Access to the Internet is growing, average speeds are faster and prices are falling. Yet mobile data usage – a key driver of the digital economy as people increasingly use mobile applications for messaging, transport, maps and video streaming services – is growing much faster in some countries than others, with Finland and Latvia in particular pulling far ahead of the pack.

In 2016, 95% of OECD country firms had high-speed Internet, up from 86% in 2010, with the biggest increases in Mexico, Latvia and Poland. Yet there are big gaps between large and small firms, particularly in Mexico, Greece, Poland and Turkey. Small firms also lag behind in their use of advanced tools such as big data analysis and cloud computing. Download the data in Excel

As well as revealing digital inequalities, the report recommends governments review labour laws, trade agreements and other legislation to take account of job displacement, the emergence of new forms of work and the evolving trade landscape. It calls on governments to also work together to tackle digital security and privacy risks amid increasing concerns about data breaches and security incidents that risk weighing on uptake of digital services.

Other findings in the Digital Economy Outlook 2017:

This website uses cookies to improve your experience while you navigate through the website. Out of these, the cookies that are categorized as necessary are stored on your browser as they are essential for the working of basic functionalities of the website. We also use third-party cookies that help us analyze and understand how you use this website. These cookies will be stored in your browser only with your consent. You also have the option to opt-out of these cookies. But opting out of some of these cookies may affect your browsing experience.
Functional
Functional cookies help to perform certain functionalities like sharing the content of the website on social media platforms, collect feedbacks, and other third-party features.
Performance
Performance cookies are used to understand and analyze the key performance indexes of the website which helps in delivering a better user experience for the visitors.
Analytics
Analytical cookies are used to understand how visitors interact with the website. These cookies help provide information on metrics the number of visitors, bounce rate, traffic source, etc.
Advertisement
Advertisement cookies are used to provide visitors with relevant ads and marketing campaigns. These cookies track visitors across websites and collect information to provide customized ads.
Others
Other uncategorized cookies are those that are being analyzed and have not been classified into a category as yet.
<a role="button" tabindex="0" class="cli-nav-link cli-settings-mobile" data-target="nece