University of Athens faces survival problem because of funding reductions 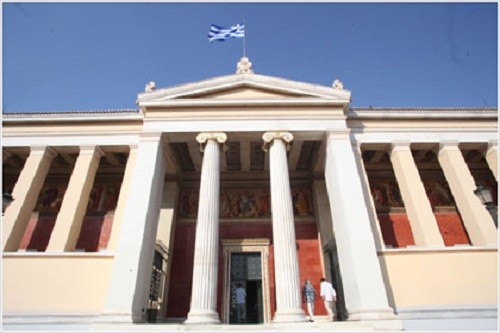 Internationally mandated austerity measures have pushed universities in Greece to the point of collapse with many of the debt-stricken country´s pre-eminent higher education institutions being forced to suspend operations. Greek universities are facing a survival problem because of funding reduction, leading to postponement of their function. The possibility of universities suspending their activities permanently cannot be excluded.

After the University of Athens announced it could no longer function because of lay-offs demanded by the European Union, International Monetary Fund and European Central Bank, universities in Thessaloniki, Patras, Ioannina and Crete have followed suit.  Cuts in administrative staff, including guards and archivists, have made it impossible to keep their doors open.

In a letter to the prime minister, Antonis Samaras, the president of the Federation of University Teachers, Stathis Efstathopoulos said that according the reports that the Department of Education is proposing cuts of up to 5% on third-level education in the forthcoming Budget would be disastrous for universities, students and the Irish economy if implemented.

Announcing suspension of operations on Tuesday, the rector of the University of Athens, the country´s oldest higher education institution, said it was impossible for the university to operate without the 498 employees who have been stripped from its ranks. "In order to function, the University of Athens has to be supported with the staff to run eight libraries, 174 laboratories, 66 university clinics established at the biggest hospitals in Attica and 18 museums," he wrote in a letter to Samaras.

As a result it would neither be able to register students, already gathered for the start of the new academic year, conduct postgraduate courses or release exam scores. More than 20,000 students the 17 departments host, are facing the danger of not completing their studies in the worst case scenario. In addition, new students cannot be enrolled as the secretary is closed, while September 27 is by law the deadline for registrations. The continuous strikes by various universities’ administrative staff, as well as the Senate’s decision to postpone the institutions’ function led the Greek Minister of Education, Konstantinos Arvanitopoulos, to an unofficial extension of the enrollment period.