Utopia or Bust “A Guide to the Present Crisis”

By Editorial
Redacción
Linkedin
Twitter
Facebook
Email
Imprimir
WhatsApp
After the financial crash and the Great Recession, the media rediscovered Karl Marx, socialist theory, and the very idea that capitalism can be questioned. Utopia or Bust is a tour through the world of Marxist thought and an examination of the basis of Western society today. 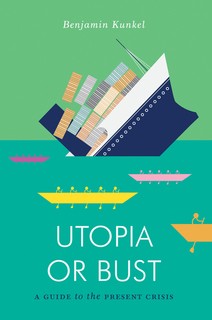 "The deepest economic crisis in eighty years prompted a shallow revival of Marxism," writes Benjamin Kunkel of the 2008 recession–and the shallowness was undoubtedly a result of the complex, sometimes difficult nature of contemporary Marxist thought.

Enter Kunkel´s Utopia or Bust, which leads the uninitiated reader through the biggest names in critical political theory today. Written with the wit and verve of a novelist, Utopia or Bust engages with the revolutionary philosophies of Slavoj Zizek, the economic analyses of David Graeber and David Harvey, and the cultural diagnoses of Fredric Jameson. Discussing the crisis of capitalism alongside the idea of full employment and the right to work, Utopia or Bust is not only a tour through the world of Marxist thought, but also an examination of the state of Western society today.