ES
Linkedin
Twitter
Facebook
HomeOpinionColumn"We have to keep on applying pressure on policy makers to get...
OpinionColumnInformationInterviews
July 2, 2013
Karina Ufert: chairperson at the European Students´ Unión 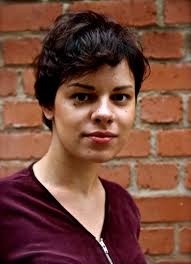 How did it happen that you got interested in student politics and can you tell us about your experience from ESU?

As far as I can recall, I had always been a hyperactive kid. Passionate about drama and fine arts in my teenage years, I have been doing quite a lot of that. Then target shooting, up to the semi-professional level while training five times a week and writing political party manifestos when sitting at boring classes.

Once I entered university, it has never been enough for me. On one hand, I had to work to sustain myself, on the other, I still had time for “extracurricular activities”. I therefore joined my local students’ union, where I spent unforgettable years and met people, who I do still consider to be my friends. In my local union, I mainly focused on the internal development, media relations and trainings in addition to coordinating the biggest students’ newspaper in Lithuania. I was lucky to get introduced to the Council of Europe’s Directorate of Youth and Sports, where I gained knowledge and understanding of the European dimension in youth policies, which helped me to get established in the work of other organisations, like the European Youth Forum.

A sequence of random events led me to ESU. By 2010, I considered myself to be too old for student politics. I was already in the middle of my mandate at the national union of students in Lithuania LSS, when I asked if I could go to Malta for a meeting with ESU’s project partners. The trip was extremely long and people seemed strange to me, when they were debating things I was not familiar with. But it also triggered my curiosity. The following year, I decided to run for the Executive Committee of ESU with a clear plan of what I was going to do. Running for a Chairperson was not a part of the plan though back then.

What were your biggest achievements in the past year and your main focus points during your mandate?

My priority over the past year has been to render ESU’s political capacity. I am glad, that ESU’s Board discussed and approved long-term strategic priorities for the first time, that serve as a basis for the yearly planning and in allocating resourses. My motivation to run for the position of a Chairperson has been all about making ESU louder on the policy level and more professional in handling advocacy work. That became real when we were appointed to co-chair the Working Group on the Social Dimension and Lifelong Learning of the Bologna process.

EU affairs focused on the new programme to support education and youth, now called Erasmus plus. ESU managed to establish a good cooperation with the Cabinet of the European Commissioner Androulla Vassiliou, national representatives and Members of the European Parliament, who have asked us for our opinion and listened to it. It may sound as a minor achievement, but I am proud that ESU’s arguments against the EU Master Degree Loan Guarantee Facility were quoted by several member states in COREPER meetings (Council of Permanent Representatives for general affairs). It seemed to be impossible to move the proposal on the loan scheme, but in the end it was. Responding to our critique, the EU Member States reviewed the original proposal and opted for a smaller-scale undertaking, as well as introducing a safety clause, such as an interim evaluation, longer grace period and other.

ESU’s membership issues have been on the top of my agenda, since I started working for ESU three years ago. One of the ideas I brought from other organisations, was to establish a pool of ESU trainers and facilitators. I am personally satisfied with the outcomes of a consultation event on that topic, which took place in Budapest this year, and I think we have built a solid ground for future work. It has to be understood, that in order to strengthen European competence in the field of education and if we want to push for more integration ESU-style, for example by raising the level of public funding and introducing students to quality assurance procedures, we have to engage with national unions of students. That is the only way to succeed.

What areas did you think could be improved or was there something in particular that you would have liked to have more time to work on?

On a very practical note, I think a mandate of one year is too short. I would really like future generations to consider prolonging it. I do want to see ESU becoming more professional. I want it to become a part of the culture in using social media to a larger extent, as it gives us a voice in the public debate. I wish I would have finalised the work on establishing and running ESU’s pool of trainers and facilitators, but I had to prioritise my policy work. I wish I would have been given a direct and timely feedback regarding my work.

On a more general level, I would like our work to be relevant for the member unions and of course for students. I have continuously asked myself, what if ESU would be forced to shut down for whatever political reasons there might be. Would at least some student think, that we need to organize an action to “save” ESU? The national unions of students should make it clearer what they need from us and we in what we can achieve. We have to keep on applying pressure on policy makers to get students interests into the debate. We must never give up on that priority.

What are your plans after your mandate ends and how will your future relations with ESU be?

I am going back to Vilnius, my hometown. On 1 of July 2013, Lithuania is taking the EU Presidency forward and I see it as an opportunity to share the experience I have gained by working on European affairs for the past four years. I will not miss Brussels because Brussels will come over to Vilnius, which is great. I also find it reasonable to take a break from the “capital of Europe” and see how relevant the Eurobubble is for a single member state and its citizens. Then I plan to finish my Master studies at Vilnius University, but also learn new things such as cooking Thai or get a certificate in Gestalt therapy. And finally look at whether I should go to the “other side” of the decision makers. That would be quite a shift from being an NGO activist for the past seven years, so let’s see what happens. One’s life must matter.

ESU will always have a place in my heart, as well as all the people whom I have been happy to encounter both inside and outside the organisation. If I can somehow strengthen the students’ movement in Europe for better education opportunities, I will find time and motivation to do that.