Youth dialogue in the United Nations the International Youth Day 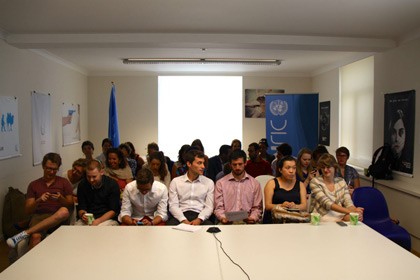 Under the "Uniting for Youth" initiative, the interactive dialogue aimed at reaffirming that the youth aspirations are one the most important priorities for the 21st century.

Based on the priorities for the post-2015 development agenda identified in the top voting countries in the UN ´My World Global Survey´, young people defined what success would look like regarding specific concerns relevant to their region; better healthcare for Nigeria (Africa), a good education for India (Asia), decent job opportunities for Belgium (Europe), protection against crime and violence for Brazil (Latin America), and an honest and responsive government for Lebanon (Arab States).

During the dialogue, the Secretary-General shared his initiatives for youth with the young participants, after which he took their questions. After the live conversation with the Secretary-General four senior officials of key UN entities working on youth (UNFPA, UN Women, UNDP, and ILO) engaged in the dialogue on what successful actions on their priorities would look like.

From the results of the My World Survey, better job opportunities have been ranked as the 4th priority for the post-2015 development agenda. In Europe, nearly one young person out of four has no job. Steven Vanonckelen, UN youth delegate for Sustainable Development of the Flemish Youth Council addressed the Global Interactive Dialogue on behalf of young people in Belgium and in Europe and raised a question about better job opportunities, and more specifically the difficult balance between equity for all and economic growth, to which the Secretary-General answered that "the UN believes youth is a driving force for change, world leaders are now focusing on resolving this current crisis. If youth do not have a place to work, this could lead to political instability, which is why the UN is very much committed to this matter".